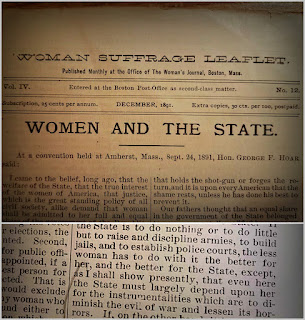 "Women and The State" is the title of the speech given by Hon. George F Hoar at a convention in Amherst Mass on Sept 24, 1891.

The paragraph that follows seems to capture the feeling today as more and more American female citizens are running for public office.

Now the debate between the advocates of woman suffrage and its opponents is, to my mind, but a contest between two theories of the function of the State.  If the State is to do nothing or to do little but to raise and discipline armies, to build jails and to establish police courts, the less woman has to do with it the better for her, and the better for the State, except, as I shall show presently, that even here the State must largely depend upon her for the instrumentalities which are to diminish the evil of war and less its horrors.   If on the other hand, it is so to use its forces as to put an end to these things; if education, justice, science, art, charity, the promotion of commerce and manufacture, the healing of diseases, the promoting everywhere increased reverence for the individual soul, be a function to which its great forces are to be devoted in the future, then it is indispensable that woman should have in its management her full and equal share.

I call my laundry process the "Me & G" laundry system:   first part I do, last part Mother Nature takes over on a war...

Best of the Best for Fashion